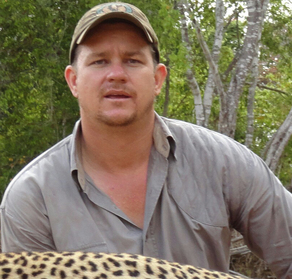 Born in Zimbabwe in April 1976, Rob started his dangerous game hunting in 1994 after
completing his A-Levels at a Private School in Harare. Rob holds a Full Professional Hunters
Licence in both Zimbabwe and Mozambique and has hunted extensively throughout Zimbabwe
including Omay North and South, Chewore North and South, Chirisa, Doma Safari Area, Doma, Makuti, Matetsi, Lemco, Mateke Hills, Bubi River and Limpopo as well as the Save Valley Wildlife Area,
and Northern Mozambique. Rob's specialty and passion is Big Cat hunting. foremost Leopard.
He joined Brooklands in February of 2012 and will be representing Brooklands at the Dallas and Reno Safari Conventions.

When he's not hunting, Rob is either traveling carrying out his marketing function, or with his
family in Harare.
Rob looks forward to hunting with you, obtaining first-class Trophies and creating great
memories. 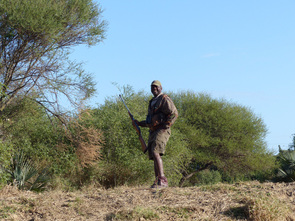 
Nevison has been in charge of the anti poaching unit at Msaise for a number of years and he
is involved with the concession management.
He resides in the area, and his in-depth knowledge of the area, combined with his exceptional
work rate allows him to get outstanding trophies for his clients.


Nevison is an integral part of the Brooklands team and his passion for his career is clearly
shown in the service he gives his clients. 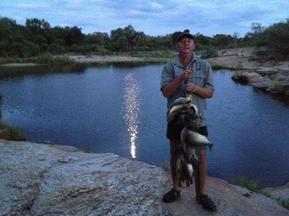 Paul grew up with a passion for outdoors.  Born in 1972, Paul was brought up and educated in Zimbabwe.
He has hunted in a host of places in Zimbabwe being:  Fuller, Panda Masuie and Kazuma
Forestry areas, Gwaai Valley Conservancy, Dete and South East Lowveld.

Paul has been with Brooklands since early 2001, has an extensive knowledge of all the
Brooklands concessions, and managed Msaise camp meticulously over the period 2011-2013.
When not hunting for Brooklands, Paul also hunts in Mozambique.  His family are based near
Harare.
Paul is completely dedicated to his profession, & will go the extra mile to get you the Trophies
you require.

All our PH's believe in ethical hunting and their high work rate allows clients to return home with great trophies, and a deep yearning to return  to Zimbabwe.